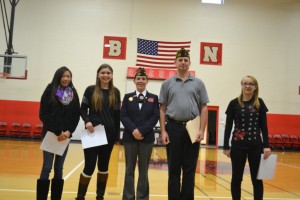 Coe-Brown Northwood Academy proudly announces the local winners of the Voice of Democracy Essay Contest sponsored by the VFW. Nearly fifty CBNA sophomores participated in the contest with the assistance of their English teacher Mrs. Kathy Biery. The winners, LilyGrace York, first; Gwyn Norris, second; and Abigail Devaney, third were selected by members of the Northwood VFW Post and were presented with certificates and checks by VFW Post 7217 Commander Ms. Shannan Brown Neisler and Post Adjutant Mr. Dan Barnhart at a recent school assembly. Since 1947, the Voice of Democracy Program has been the Veterans of Foreign Wars (VFW) premier scholarship program. The contest is open to students in grades 9-12, who are enrolled in a public, private or parochial high school or home study program in the United States and its territories. . Each year, more than 50,000 high school students compete for more than $2.3 million in scholarships and incentives. This year’s theme was “Why Veterans are Important to Our Nation’s History and Future” To enter the contest students were required to record a reading of their essays to a CD. Entries are three to five minutes and are judged according to originality, content and vocal delivery. Paper copies of the essays are also submitted. Entries begin at the post level. Winning students then have the opportunity to compete on the district, state and national levels. Congratulations to these talented students.

American Red Cross Blood Drive to be Held at CBNA