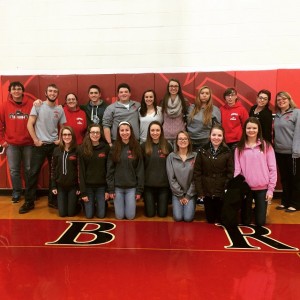 PRESS RELEASE: This year has been a very busy year for Coe-Brown Northwood Academy’s chapter of Family Career and Community Leaders of America. FCCLA, formally FHA, is the only career and technical organization that focuses on family. Student members and officers of this organization believe in the need for strong families in our society and many plan to enter into careers relating to the fields of social work, psychology, education, and culinary arts

In September, CBNA FCCLA hosted the Homecoming Pancake Breakfast, which was a great success in its first year. Later in the fall, the chapter helped Meraya Knight with her Stuff-a-Bus food drive for End 68 Hours of Hunger, an organization that provides food for the weekends to local children in need. This event began a relationship between the two organizations. CBNA FCCLA has been volunteering one week per month to pack the bags for the End 68 Hours of Hunger program that serves Northwood, Nottingham and Strafford.

Advisors Mrs. Mandy Morales and Mrs. Toni Canfield are incredibly proud of these, and all members of the CBNA FCCLA chapter, for their many accomplishments this year. Congratulations to all.