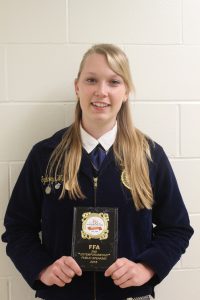 Coe-Brown Northwood Academy 2016 graduate Sydney Wilson recently received second place in the FFA Extemporaneous Speaking Career Development Event at the Eastern States Exposition in Springfield. MA.  In the Extemporaneous Public Speaking CDE, participants are given 30 minutes to deliver a speech on one of three assigned agricultural topics. Students must learn to think on their feet and develop an argument quickly and persuasively. Miss Wilson, a Nottingham resident, who is currently attending NHTI, spoke about the Impact of Urban Agriculture. She also won the state competition in the spring at the NH FFA Convention, and will be representing NH at the National FFA Convention in October.  Also attending the Big E from CBNA was the Horse Evaluation team of Preston Bethke, Molly DeTrude, Ryan Graeme, and Emery Travers, who also will be representing New Hampshire at the national level in October. The CBNA FFA chapter is advised by Sarah Ward and Charles Whitten.