We are postponing all games scheduled for tomorrow, December 17, due to the forecast of a winter storm.  The Alumni Games will be played on Sunday at 12:00 (Girls) and 1:30 (Boys). The Hall of Fame induction will take place at 12:00 prior to the girls game. Freshman games will be made up at a later date, yet to be determined. Thank you for your understanding, and we look forward to seeing you on Sunday. 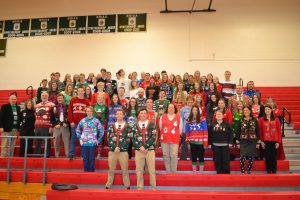 On Friday, December 9, students and staff at Coe-Brown Northwood Academy were recently caught spreading a bit of holiday cheer on the school’s annual “Ugly Holiday Sweater” day. Students competed for a chance to win gift cards to Dunkin Donuts by wearing their ugliest sweaters. Sweaters were judged by a panel of faculty members. This year’s winners were senior Joseph Guptill in the category of ugliest unaltered sweater and junior Courtney Snow for the ugliest altered sweater. This activity provides a chance for CBNA students and staff to get into the holiday spirit and spread some good cheer throughout the school community. 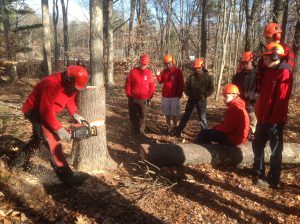 Coe-Brown Northwood Academy FFA students Faith Wilson, Ryan Graeme, Preston Bethke, Devin Sullivan, Sam Whitehouse, Nick Jenson, Nik Mewkill, Troy Russo, Caleb Rollins, Evan Wimsatt, Wayne Libby, Jackie Joy, Molly Swansburg, Matthew Brown and Brenda Hayes recently had the opportunity to attend a chainsaw safety course at CBNA taught by Mr. Dan Tilton of Tilton Equipment, Rye, NH. A resident of Strafford, NH, Mr. Tilton instructed students on everything they needed to know about chainsaws including correct safety equipment, how to correctly and safely hold and operate a chainsaw, and the parts of a chainsaw and the purpose for each part. He also showed students how to properly sharpen a chain and the different types of chains used for different types of logging. Part of Mr. Tilton’s instruction also included the correct way to fell and limb a tree, the way to avoid injury from a kick back from a chain saw and the way to control it when it happens. 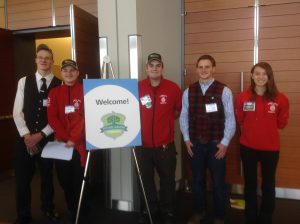 Coe-Brown Northwood Academy agriculture students Steven Chase, Preston Bethke, Ryan Graeme, Wayne Libby and Faith Wilson with Mrs. Sarah Ward with Emmett Bean and Frank Grano of Bartlett Tree Company traveled to Boston, MA to attend the New England Grows Conference on December 1, 2016. New England Grows is renowned for its world-class education offerings and innovative trend spotting. Founded in 1993 by green industry professionals for green industry professionals, the educational conference and exposition gives participants unique access to targeted, industry-specific products, information, education and connections. The New England Nursery Association, Massachusetts Arborists Association, Massachusetts Association of Landscape Professionals and Massachusetts Nursery & Landscape Association are the organization’s founding partners. The CBNA students were invited guests of Bartlett Tree Co. and while at the conference attended a workshop on Tree Assessment with Tom Smiley, and had the opportunity to attend a panel discussion on the subject of Future Leader GROWS.  New England GROWS is a great place for students to explore all the possibilities and potential available to them in the country’s burgeoning green industry. Involvement with GROWS allows students an exclusive opportunity to gain cutting-edge horticultural knowledge, engage with industry leaders, explore the latest equipment and services, and become familiar with many career options. The goal of this new program is to introduce new students to all the green industry has to offer while providing an improved framework for their experience at GROWS. Students had also had an opportunity to walk around the trade show and see all kinds of equipment, plants, etc. for arboriculture, nursery management, landscaping and other green industries.

Coe-Brown Northwood Academy Theatre will proudly present a showcase of student directed one act comedies on Wednesday, December 14, 2016, at 7 pm in the Gerrish Gym on the CBNA campus. The evening will feature On the Porch One Crisp Spring Morning by Alex Dremann, a spy spoof with a twist, directed by sophomore Cooper Leduke featuring Nina Laramee and Mackenzie Flanders; the hilarious detective send-up No More Mr. Nice Guy by Jonathan Rand directed by senior Teagan Folland featuring Paige Marston, Lily Marston, Cailinn Monahan and Jacob Lock; Poor Bob by Elizabeth Meriwether, a comedy that examines the meaning of life, Yahtzee, and The Neverending Story, directed by senior Cassandra Barnhart featuring Ian Gollihur, Kayla Pollak, Dylan DeTrude and Brian Downer; the sci-fi spoof Aliens vs. Cheerleaders by Qui Nguyen directed by senior Joseph Guptill featuring Madison Rollins, Hannah Munck, Tim Bowen, Lauren Rose, Rylee Rogers, Cassuarina French, Zach Helm, Patrick Helm, Sandra Black, Cody Peck, Mirah Johnston, Olivia Roach, and Caitlin Reynolds; and the New Hampshire premiere of Ray and Milo by Chris Sheppard and Jeff Grove, an examination of our conventional notion of family units, told in the form of a parable about penguins in a zoo. Ray and Milo is directed by senior Lauren Burrows and features Alex Mercedes, Ian Gollihur, Arianna Jones, Marissa Gast, Braelin Ash, Julia Sommer, Erin Boodey and Emma Tobbe. Several of the pieces contain material which may not be suitable for younger audiences. General admission tickets are $5 and will be available at the door the night of the show. For further information contact elent@coebrown.org or call 603-942-9931 ext. 237.