On January 11, 2017, the Coe-Brown Northwood Academy chapter of FBLA held activities related to Organ Donation Awareness Day. The chapter distributed green ribbons and talked to students about the statistical need for organ donors, as well as asking students to consider being organ donors when their drivers’ licenses come up for renewal. Coincidentally, CBNA sponsored a Red Cross Blood Drive on the same day, which FBLA members assisted with and many FBLA members donated blood for the first time. In addition, several Economics classes participated in a research writing project explaining reasons for the demand for organ donors, and reasons for the supply not meeting the demands for donors. CBNA FBLA chapter secretary senior Summer Barnes, who is heading the CBNA chapter initiative for the New Hampshire FBLA Organ Donor project contributed the following paper:

The Market for Organs by Summer Barnes, ‘17

The world is full of gracious people waiting to help those in need.  There are also many people looking out for themselves and ready to make a quick buck off anything they can.  These two types of people are what causes the debate on whether or not there should be a market for organ donation.  Around the world there are many people in need of organs, blood, bone marrow, etc.  People in need typically have a very short window of time to receive what they need. There are no to little organs available to those who are in desperate need of them.  It seems obvious that a market for organs would solve the problem at hand.  However, the question remains on whether or not this would be equitable and efficient.  Despite these reasonable concerns, a market in organs is the only sensible solution to helping the people who are in urgent need of this vital necessity.

The government is utilized for its various resources in many aspects of everyday life.  Law enforcement is a major source of cost for the government.  Each year around 100 billion dollars are spent on police units and law enforcement in the United States (Justice Policy Institute).  Most of this spending is used to control illegal trade of drugs, people, organs, etc.  This valuable money and time could be being employed elsewhere in the country.  If an organ market was created there would be less pressure on the police forces to control this aspect of illegal trade.  The market would provide viable opportunity for the funds to be shifted elsewhere; thus creating more time and money to be spent on more pressing matters, such as the drastic rise in human trafficking and drug trade.  The United States is in desperate need of more law enforcement to control this rising problem, however they are lacking sufficient funds to increase the already extremely expensive budget.  The creation of an organ market would give more time and money to other more pressing needs (How the Government Controls What You Buy and Sell).  This is just one of the many reasons why the United States should legalize organ trade and provide the resources to establish an organ market.

America has always been known as a country of opportunity and promise.  However, there have been points throughout American history where a certain class of people have been left to greatly suffer.  Over the years the government has provided new ways to help the less fortunate.  Less governmental attention, and less suffering would occur if organs were allowed to be sold for money or in exchange of products or services.  As of 2014, 47 million Americans were reported to be living in poverty (Poverty Facts).  This is about 14 percent of the population.  In spite of this, these numbers could be greatly reduced if people were allowed to sell non-vital organs when they were in desperate need of money. For example, a kidney is estimated to be sold for around 262,000 dollars on the black market (Jade).  This large sum of money could greatly benefit people suffering from job loss.  Being able to sell organs would not only benefit the people selling them, but the people in desperate need of said organs.

Across the world, children, adults, and seniors are in need of an organ. This may be due to a rare illness or condition, an accident, etc.  Despite the cause, each day 22 people die while awaiting an organ transplant (Organ Donation Statistics).  Twenty-two people a day is far too many to be lost to a problem that could be resolved.  Most humans are walking around with two kidneys, one of which they do not need.  These useless organs could be vital to other people.  An organ market would instigate the beginning of more organ donations.  As of now not nearly enough organs are donated to cover the amount of demand.  If people were allowed to trade their organs on free choice with possible benefits to them, this may promote more donations.  A simple change of law would allow so many lives to be saved, so many families spared the suffering of losing a loved one.

The selling of ones’ organs comes across as gruesome and unethical. Despite the negative persona organ trade receives, it is absolutely necessary to save many people each year.  There are several reasons why organ trade should be legalized.  It would reduce the amount of law enforcement money and time spent on controlling illegal trade of organs.  An opportunity to make a large sum of money off an organ that is not necessarily needed, would provide people in poverty with a chance to get back on their feet.  However, most importantly it would help save countless lives that are lost each day because they were awaiting an organ transplant. 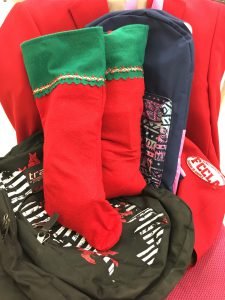 Items collected by CBNA FCCLA to help the community during this holiday season.

With the holiday season comes the spirit of charity and a time of giving. People are more generous during the holidays, and CBNA’s FCCLA (Family Career and Community Leaders of America) feels that way too. From Parent’s Night Out on December 9th to our backpack drive for End 68 Hours of Hunger, we are doing our part to make the holidays a happy time for everyone. FCCLA is also filling and donating stockings to Santa’s Helpers in Northwood as part of their Christmas Drive.

Over the past two months, FCCLA has participated in community building activities, including a CTSO (Career and Technical Student Organization) dinner, where all Coe-Brown’s vocational clubs (FCCLA, FBLA, and FFA) joined together for a spaghetti dinner and friendship building activities. FCCLA helped with the Feed My Starving Children food pack at Turbocam in Barrington in November. FMSC packs dehydrated food full of essential nutrients and sends the bags to those in need all over the world.

As always, FCCLA hopes to continue to participate in community services events into the New Year. We hope that your New Year is phenomenal, and that you join us in the spirit of giving this holiday season too!