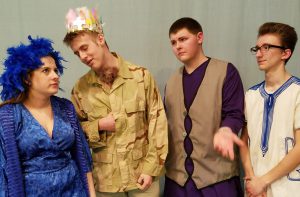 CBNA students (from left) Cassandra Barnhart as Procne, Brian Downer as Epops, Joseph Guptill as Eulpides and Ian Gollihur as Pithetaerus rehearse a scene from The Birds: A Modern Adaptation.

Looking for a little humor to lift your spirits this winter? Then the theatre students of Coe-Brown Northwood Academy have just the cure, as they present The Birds: A Modern Adaptation by Don Zolodis on March 9, 10 at 7 pm and March 11 at 2 pm in the Gerrish Gym on the CBNA Campus in Northwood. Based on Aristophanes’ comedy first performed in 414 B.C., The Birds: A Modern Adaptation tells the story of two miscreants who are fed up with a world of insurance salesmen and petty problems and flee to the kingdom of the birds for a simpler life. While living there, the two scheme up a financial jackpot that could turn the bird’s land into a powerful utopia. Their only obstacle: the wrath of the gods. A hilarious and satirical look at politics, religion and the foolishness of mankind that revives and revamps Aristophanes’ classic comedy. Senior Joseph Guptill and sophomore Ian Gollihur playing miscreants Eulpides and Pithetaerus respectively, lead an enthusiastic cast of thirty-one students including seniors Cassandra Barnhart, Marissa Gast, Arianna Jones and Kelsey Wallace; juniors Sandra Black, Erin Boodey, Zachary Helm, Nina Laramee, Jacob Lock, Cailinn Monahan, Kayla Pollak, Alyssa Reiff, Allison Rose, Julia Sommer and Courtney Snow; sophomores Braelin Ash, Dylan DeTrude, Brian Downer, Mackenzie Flanders, Cassuarina French, Cooper Leduke, Cody Peck and Madison Rollins; and freshmen Patrick Helm, Connor Nowak, Abbi Pelletier, Caitlin Reynolds, Rylee Rogers and Lauren Rose. The production is directed by faculty member Elizabeth Lent with assistance from faculty member Kolby Hume. Caution, The Birds: A Modern Adaptation is not recommended for younger audiences. Reserved tickets are $8 for adults and $6 for students and seniors and will be available starting March 6 by email – elent@coebrown.org , by calling 603-942-5531 ext. 237, at the main office before or after school or at the door. This will be just the cure for the winter blues. Hope to see you there.