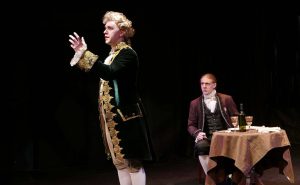 On October 2nd, 2017, Coe-Brown Northwood Academy will present Mozart and Salieri, an opera in one act by Nicolai Rimsky-Korsakov. This rare masterpiece will feature tenor and CBNA alumnus Michael Dodge in the role of Mozart, baritone Rob McGinness as Salieri, accompanied by Dr. Dan Perkins of Plymouth State University on piano. The performance will take place in the Gerrish Gym on the CBNA Campus at 7pm. The opera will be sung in the original Russian with English translations supplied. Admission is by freewill donation. Rob McGuiness is a graduate of Oberlin Conservatory and will receive his Master of Music from Peabody Institute in May. As a scholar of musicology and theory, Michael Dodge has presented research papers on vocal music at conferences in the United States and abroad. Michael holds degrees from Plymouth State University in New Hampshire, and the Peabody Conservatory of Johns Hopkins University where he worked as a graduate assistant and was awarded the George Woodhead Prize in Voice.  Dr. Dan Perkins is in his 24th year at Plymouth State University (NH), where he is professor of music and director of choral activities, and in 2007 was appointed the first Stevens-Bristow Distinguished Professor.