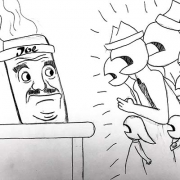 Coe-Brown Northwood Academy students may soon have  not just one coffee shop, but two on their route to school.

Four months ago Mike Sullivan proposed the idea of the coffee franchise, Aroma Joe’s, being built on his property along Route Four. Sullivan and his wife Christine have been living along Route Four for two years. His dedication to the project is seen through the traffic studies and many proposals he has created for the town of Northwood’s planning board.

Students and members of the Northwood community would be affected in many ways if this new coffee franchise was added. Many think the Aroma Joes will cause even more traffic congestion resulting in accidents on Route Four. There have been four fatal car accidents on Route Four since 2016, and many members of Northwood are questioning whether or not this business will actually benefit the town. In a letter addressed to the Northwood planning board, Marcia Severance of Northwood said, “It would seem that putting an Aroma Joe;s would certainly not be in keeping with the historical and rural character of this property,” her statement is similar to many other residents of Northwood who believe the Aroma Joe’s would not suit the town.

Melanie Hamilton of  Northwood said “Northwood residents like to view the town as unique, as having a special character, with small businesses such as the antique dealers, Susty’s, Cooper Hill, and Umami lining Route Four.” The risk of losing the small business-feel of Northwood is a fear many have.

Others such as Martine Canfield, a resident of Northwood, have suggested that extreme changes to Route Four need to be made such as, “…. a traffic signal needs to be in place at the intersection with Bow Lake Road first, before the coffee shop opens for business.” A common fear of those who do not agree with the coffee shop being built is the traffic congestion that would worsen.

While there are residents of Northwood who oppose the idea of the Aroma Joes, the new coffee shop would be a dream for most students to have such as Kate Hocevar, a junior at Coe Brown, who says, “Having a new place to go get coffee in the morning and a new selection for students to get different drinks will make my mornings better.”

There is a Dunkin’ Donuts attached to the Mobil gas station that has been very successful in employing Coe-Brown students, as well as giving students and members of the community a quick and easy food or beverage option. Sullivan thinks the Aroma Joes will do the same and is “pro business.”

The town is divided over the proposal of the new Aroma Joes as the Northwood planning board works through the adjustments and reasoning that are involved with this possible new addition to Northwood’s unique community.

Upperclassmen to Underclassmen: Advice for Your Years in High School