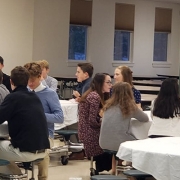 Come election day, students grouse about the lack of work their class officers complete,and when asked most comments are negative. However, students who do not attend the meetings do not know the inner-workings or behind the scene information. Many are unaware of how much time and work go into any event or fundraiser.

The process begins with an idea, which is brought to the table at a meeting with advisors and as many officers as possible. This, however, is difficult to arrange. Working with twenty different people, with ages and obligations varying so much, is not a simple task.

Once the meeting is held after many emails and texts have been exchanged, the idea is then put to paper on an activity sheet. The sheet asks for information regarding chaperones, dates, times, overviews of activities, and approval from Officer Potter and administration.Once filled out completely, the activity sheet is brought to Ms. Wheet, who is given the task of reviewing and approving/disapproving the activity.

The sheet is quickly out of her hands, however, because she will need to run the idea by any faculty members it may involve, “For instance, if any athletic fields or either of the two gyms would be used, Mr. Skidds needs to check his sports schedules and sign off that those facilities are free.  Then, Mr. Evans will receive the sheet next, so he knows which buildings or classrooms will either need a custodian present, or will have to be cleaned after the event is complete,” Wheet says. After this, the sheet is taken to Headmaster Smith, where they sit down and discuss any issues that could arise from the event. If all plans seem smooth and without potential problems,  Headmaster will give the final stamp of approval.

Because of the lengthy process, the activity sheets need to be turned in at least two weeks before the date of the event, or Ms. Wheet may not be able to return the sheet in time. “It can be a week or so before everyone gets around to replying to me, so that is why it’s no fun to get last-minute, urgent activity sheets. I prefer those who plan ahead!” Wheet says regarding receiving activity sheets. This means the student government has to begin early when planning events for the beginning of the school year, keeping in touch and holding planning meetings during the summer to come up with ideas and begin the process before entering the school.

Not every sheet is approved, and when a group of officers is faced with a sheet that is lacking the stamp of approval, they are forced to scrap the idea quickly and begin brainstorming an alternative. The process is then repeated until a viable idea is made.

After the activity is approved, that is when the planning begins. Kathleen the vice president of the senior class has been apart of student government for two years. She explains that, “So much work goes into an event and most students are unaware. Communication about said events are shared, but forms of communication could be improved.”A survey was presented to the student body and 66.7% of the people who filled it out were unaware that they were able to attend the meetings. More communication about the meetings could potentially bring student body members, where they could then share ideas or thoughts.

In all, much of the student body is unaware of the amount of effort and planning that goes into successfully executing a class event. If the students are interested in learning more about the process and what goes into it, they are encouraged to attend student government meetings. They should seek out their class officers to find out specifics on meeting times.