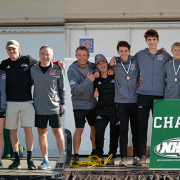 It has been one whirlwind of a concluding season for the Coe-Brown Cross Country teams!

On October 26 the Coe-Brown Boys Cross Country team traveled to Derryfield Park in Manchester. The boys worked hard and definitely earned their title. The group of boys placed first with the lowest champion score in 30 years, their score was 21. First second and third place were all filled with Coe-Brown Boys. In first place was Luke Tkaczyk (Junior), second place was Aidan Cox (Freshman) and in third place was Dawson Dubois (Senior). 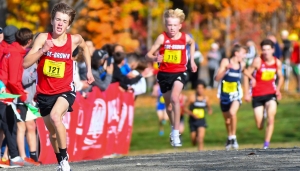 Winning this race was Coe-Brown’s 5th title in six years. Luke’s first place win was the fourth DII win fin male’s division for Coe-Brown since 2017. Coe-Brown boys had seven runners finishing in the top twelve and all seven runners ran the race in under seventeen minutes. Top three runners were about 3 seconds apart from each other. As a team collectively they ran faster than any DII team in history. Coach Cox says, “These accomplishments are because of their commitment to a lifestyle and each other.” This team currently is number one in NH regardless of school size number 5 in the northeast and 25 in the country.

Winning first place could not have been done without all the runner’s hard work and strict discipline. These boys and several others not only worked hard during the school year, but also throughout the summer. Not only do these boys work hard on the trails, but they also commit time to their school studies. Winning this could not be possible without the help of their coaches, Coach Cox and Coach Tkaczyk. These coaches have pushed their runners to work hard and succeed in all that they do.

Most importantly because we won first place, there was a second place team. That second place team was Oyster River with 63 points (Sullivan). So, Coe-Brown Boys not only won first, but beat our rival team. The rivalry for the Route Four Cup lives on.

On Saturday November 2nd the boys competed in the Meet of Champions and with all their hard work paying off, they won first place. Aidan Cox got second place overall, and first place for Coe-Brown, with an average mile of five minutes and ten seconds. Carter Sylvester got ninth overall, but second for Coe-Brown. Dawson Dubois and Luke Tkaczyk earned seventeenth and eighteenth place both with an average mile under five minutes and ten seconds. The boys received 57 points over all and set a record of best overall time. 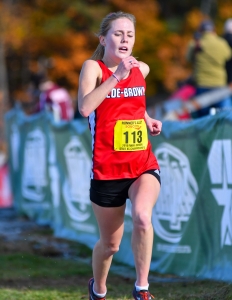 Congratulations to both teams for outstanding performances in their meets!