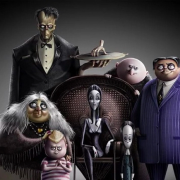 Recently, I saw the new Addams Family movie with my grandma, and it is now one of my favorite movies. The animation was amazing. I liked how the tree had more fluid animation with the bending and everything. It was great to see how 3D animation has changed over the years. The cast was very well-chosen. I liked Nick Kroll as Uncle Fester. Kroll’s voice made the character match up with their look.

Now for the story. Bear in mind, spoilers are ahead. The movie starts with Morticia getting ready for her wedding. In the wedding, there was a funny joke that could call back to the original show. The townsfolk attack, forcing the Addams clan to flee. The newlyweds end up in New Jersey, with another really funny joke with the sign. They meet Lurch,their forced butler after hitting him, and move on to their new home. The opening credits sequence is really cool with the growth of the family and showing the actors. Morticia wakes up and gives the house, which is alive and a spirit, coffee after it yells “GET……OUT!!!!!” Then we’re introduced to Wednesday and Pugsley Addams. The tree wakes them up and they have a sibling rivalry in addition to internal conflicts.

The whole family is coming to Pugsley’s coming-of-age celebration in two weeks. Meanwhile, a super popular woman finishes wrapping a new episode of her home makeover show. The season finale is happening in two weeks so one can assume what’s going to happen. Soon Wednesday and Parker, the woman’s daughter, meet, and the conflict truly starts. Uncle Fester shows up early and then more hilarious “oblivious to pain and death jokes” start happening during Parker and Wednesday’s talk. The town is all the same and the Addams are different, so Parker’s mom goes on this neighborhood chat thing and it’s evident that it’s like a utopian dystopia. Soon Cousin Itt, played by Snoop Dogg, arrives, and soon the rest of the family shows up too. During the coming-of-age celebration, the town attacks and Pugsley helps the family realize that tradition should be followed in their own way. The townsfolk realize they made a mistake, and so change their ways. They rebuild the Addams house, the spirit returns, and then …Animated original intro to the show! This movie was really good, and deserves a watch.