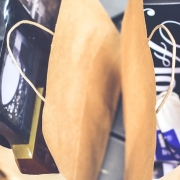 Hurry up and clear your plates, throw everything in the sink! Thanksgiving dinner is over. It’s time to trample a pregnant lady and 82 year old man at Target to get that 72-inch flat screen with that Black Friday deal. Does anyone else think Black Friday is the most awful, greedy, yet wholly American holiday in existence? In my opinion Black Friday is definitely an experience everyone should have, but just once. After a while it gets old, annoying and down right irritating.

“While shopping has traditionally surged after Thanksgiving, Black Friday’s roots only trace back a matter of decades. The term “Black Friday” (as used today) originated in the 1950s in Philadelphia, where the Army-Navy football game is most commonly held the Saturday of Thanksgiving weekend. When throngs of mid-century shoppers and visitors swarmed the city that Friday, Philadelphia police officers required to control crowds would begrudgingly call it “Black Friday.” By the 1980s, retailers nationwide latched onto the term “Black Friday” and spun it to their advantage. Rather than using the phrase to bemoan the crowds, they exalted it as a prosperous start of the holiday shopping season when stores started turning profit (or “went into the black”). You know the rest of the story: blockbuster bargains, massive lines, and sales stretching into Cyber Monday” (Lim).

Black Friday shopping was a one-day event following Thanksgiving in past years. Eventually, many stores have begun opening earlier and earlier, starting Friday at midnight, then on Thursday night and now even before Thanksgiving has passed. Some stores have also started opening on Thanksgiving, closing at midnight and reopening Friday morning. Starting earlier can cause a dilemma for shoppers who have to choose between cooking Thanksgiving dinner and getting out early before all the good deals are gone. This also causes issues for retail workers who have an even shorter break before they have to start work.

Black Friday is the oxymoron holiday to Thanksgiving. We are supposed to be giving thanks and relaxing with family and loved ones. Instead we are running to get the best deal and christmas presents for people and ourselves. Not only are we missing out on the meaning of Thanksgiving, but the retail shoppers are losing their special dinner all together. Working a shift noon to midnight takes up the whole day and by the end all they are going to want to do is sleep and relax. The retail associates might have to work on Thanksgiving and the following day for Black Friday. My opinion is that all of this seems so unethical and frankly not fun.

Just three days after Black Friday is, Cyber Monday. Cyber Monday is like Black Friday’s less annoying and more mature, older sibling. Cyber Monday in my opinion is more enjoyable because I can shop amazing deals in my pajamas while still laying in bed. I do not have to deal with other people, over crowded lines and rude people, “got there first”.