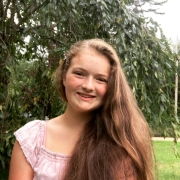 “Though she is not a native speaker of Spanish, her work has been exemplary and she scored a perfect score of 5 on the AP exam.” – Jennifer Sommerer, Spanish Language Teacher and President Elect of the New Hampshire chapter of AATSP—American Association of Teachers of Spanish and Portuguese

Northwood, New Hampshire…Coe-Brown Northwood Academy Headmaster David S. Smith is pleased to announce that senior Emily Huebel has earned the New Hampshire Seal of Biliteracy. Although Huebel is not a native speaker of Spanish, her exemplary class work and perfect score on the AP exam resulted in this important recognition. She will be awarded this distinction at graduation with the Seal of Biliteracy on her diploma. Huebel is CBNA’s first recipient of this prestigious honor.

Huebel has long recognized her interest in languages. Although she never had the opportunity to travel out of the northeastern United States and Canadian Maritimes as a child, she was exposed to the basics of the Spanish language in elementary school at Saint Mary Academy in Dover, NH, and junior high at Strafford School in Strafford, NH. In fact, when her junior high Spanish teacher became her homeroom teacher, Huebel enjoyed the interplay of Spanish in daily homeroom conversations. Huebel notes, “Spanish was cool. I liked learning it, and in junior high it was like a secret code we used with friends.”

The opportunity to pursue Spanish in high school was a welcome one, and Huebel started 9th grade at Coe-Brown in Spanish 2 Honors. She loved the language and how it sounded, expanding her vocabulary whenever possible, and reading Spanish-language articles over and over until she understood them perfectly. The year prior to the AP exam, Huebel’s Spanish teacher, CBNA faculty member Jennifer Sommerer, worked with the students to improve their conversation techniques, listening skills, and understanding of Spanish culture worldwide and its influences. That in-depth immersion made the difference on the AP exam, according to Huebel, allowing her to, in her own words, “get into the zone” and power through all four components of the exam with confidence.

With Biology and a pre-med track on the horizon at St. Michael’s College, Huebel plans to add a double major in Spanish in hopes that when she becomes a doctor, her knowledge of a second language will help her communicate more effectively with all of her patients, especially those in urban centers like Boston, where she hopes to be eventually.

The Seal of Biliteracy is a national award that has been adopted by more than forty other states across the country. The award recognizes students who have studied and attained proficiency in two or more languages by high school graduation. The New Hampshire Seal of Biliteracy award was made possible through collaboration between the NH Association of World Language Teachers (NHAWLT) and the NH Statewide English Learner Educator network. The NH Association of World Language Teachers has agreed to be the stewards of this award.